Home › Revisiting 87 Years’ Worth of Innovation

Revisiting 87 Years’ Worth of Innovation 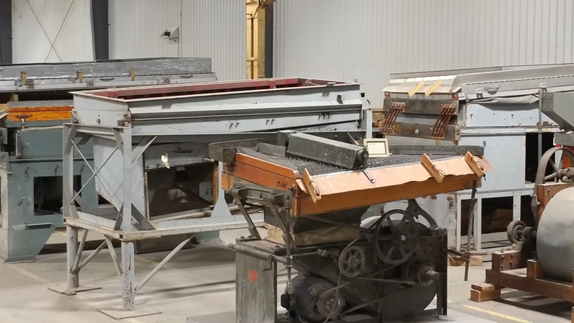 Oliver Manufacturing’s industrial warehouse has all one might imagine of a factory situated in the midst of Colorado’s rural plains. The fine smell of dust hangs in the air; hot flashes of light burn from behind protective curtains as workers weld metal together; and the occasional rumblings of one machine or another echo on the east end. But in one small corner, tucked away from the more familiar factory turf, one can find something they may not expect: a museum.

The exhibit is small but rich with history. It features decades-old machines from the 1950s, 60’s and 70’s. Most of these models still run, and have twins operating for clients in the field to this day. The oldest item on display, a gravity separator, was manufactured in the late 30’s or early 40’s. Its approximate age is betrayed by its wooden frame and triangular deck, which was standard for gravity separators until Founder Oliver Steele patented the rectangular deck design in 1956. Another machine in the exhibit, a 1986 Maxi-Cap, is the sixteenth machine in its line ever built.

“Oliver’s History Museum area connects our staff, customer visitors and student tours to the evolution of both our company’s history – starting in St. Louis, MO – and to our line of automated gravity separators over the years,” says Brian Burney, President and CEO of Oliver Manufacturing.

The museum provides historical context to Oliver Manufacturing’s drive to innovate. Guests are encouraged to peruse the pages of Oliver’s archives, which are situated near the gallery of retired machines. They hold old Oliver advertorials, staff appearances in the press and photos from the company’s past – including coverage of retired President Geoff Burney’s many ventures into the world of professional racing.

It’s easy to be drawn into the many tattered documents and grainy photographs. It’s easy to lose oneself amongst the dated machines and mechanical artifacts. But as one pulls away and looks out toward the bustling factory floor, full of new employees, new parts and new sleek machines, it’s just as easy to see how Oliver Manufacturing is as innovative as it ever has been.